These days, science and its method of logical reasoning are under fire from the spread of fake news on the internet. These hoaxes undermine and create confusion around issues for which there is overwhelming scientific consensus, including in the areas of the environment, health, and nutrition.

The internet has become a gold mine for producers of fake news. They profit off of the instantaneousness of the web by providing content with absolutely no basis in science. This includes content from industry lobbies, conspiracy theorists, and scammers hawking ‘miracle cures’ as well as people who manipulate information to take advantage of the public’s fears and lack of scientific literacy. This demagoguery is all the more pernicious because the fake news is often picked up – voluntarily or otherwise – by politicians and the media. We are thus entering into a post-truth era, where it will be very difficult to distinguish truth from falsehood, opinion from fact, and scientific information from the manipulation thereof.

CASE IN POINT: DID 5G DESTROY TREES IN SERBIA? 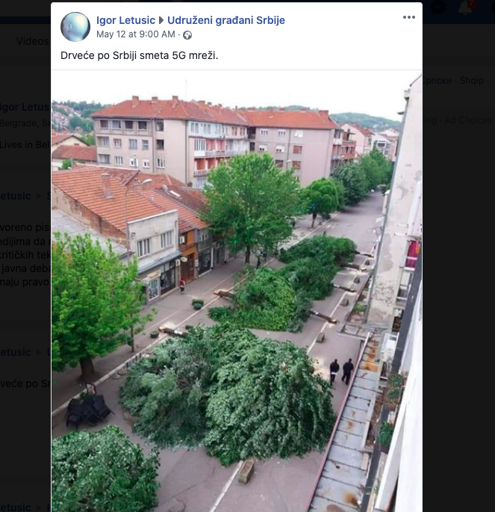 This photo, taken in the Serbian town of Aleksinac and posted to the Facebook group Udruženi građani Srbije, would have you believe that ‘trees have been cut down because of 5G’. The same photo also appeared in other groups in Serbia, such as ‘STOP 5G mreži u Srbiji’.

This ‘news item’ is, however, a lie. According to the website Raskrikavanje.rs, which debunked it, the trees were not destroyed because of 5G. In fact, the photo was taken during road repairs that were part of the town’s public work projects. To date, not a single study has shown that 5G is harmful to our health or the planet’s.

5G is the source for another conspiracy theory that links the technology to the Covid-19 pandemic. This massive, global conspiracy theory claims that the launch of 5G technology is connected to the emergence of the virus. While some Facebook posts are happy to make a connection between 5G and the disease, others assert that the technology can be used to ‘activate a laboratory-made virus from Wuhan’ or see the pandemic as ‘a pretext to develop a lethal vaccine that is activated by 5G radiation’. All of these narratives evolve; they start from the same fictional basis but have diverged as they have been shared across the world.

Scientists at Queensland University of Technology in Australia followed the spread of the theory from January until 12 April 2020. Their research enabled them to demonstrate how the rumour evolved from its origins in existing conspiracist groups with little clout to being amplified by celebrities and media and sports stars, thus spreading more widely to a more diverse audience.

The World Health Organisation, through the fact-checking website it created to fight back against Covid-19-related fake news, has sent out a warning to the public against the rumours. The site refutes and debunks the conspiracy theory, explaining that: “Viruses cannot travel on radio waves/mobile networks. COVID-19 is spreading in many countries that do not have 5G mobile networks. COVID-19 is spread through respiratory droplets when an infected person coughs, sneezes or speaks. People can also be infected by touching a contaminated surface and then their eyes, mouth or nose” (Source: Coronavirus disease advice for the public: Mythbusters).