Traditional media are media that pre-date the internet – that is, radio, television, and print media. Starting in the 1990s and the dawn of the digital era, these legacy media reinvented themselves with ‘online’ editions as well as smartphone and tablet versions.

In 2004, new types of media arrived on the scene and started to compete with traditional media: social media (Facebook, YouTube, Instagram, etc.). Social media are digital platforms with user-generated content that are based around people’s interactions. This logic of collaboration is unique to Web 2.0: users, once passive consumers of information, have taken on an active role.

The evolution of the media world represents an opportunity. The rise of new digital media, such as blogs, Wikipedia, YouTube, and social networks, encourages broader access to knowledge, freedom of expression, and civic participation.

When it comes to the role of media, both traditional and online, UNESCO provides a useful method of categorisation. Media can fulfil one or more of the following purposes:

The Balkan route is an increasingly common route for Syrian and Afghan migrants seeking to reach Europe.

Social media play a major role in how this information is covered. Asylum seekers’ tweets and Instagram posts from along the Balkan route paint a better picture of the human reality experienced by people involved. 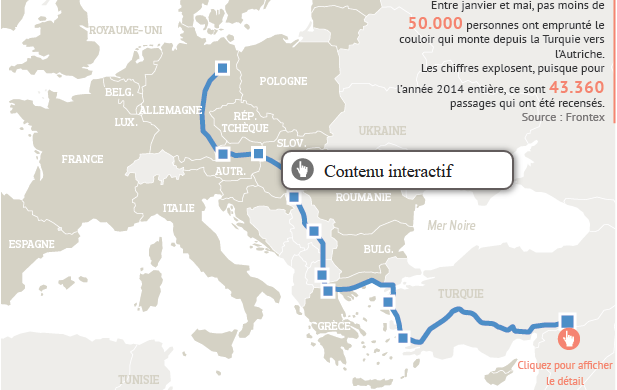 The migrants’ journey on the Balkan route, documented and plotted using the migrants’ own social media content.

This use of social media attests to the changes in the media landscape and the role of media. Nowadays, anyone can be witness to an event and share it with the entire world one second later. This has given rise to ‘citizen journalism’, which makes every social media user a potential producer of news.